Proposed development in Tahoe’s Squaw Valley threatens everything we love about the Sierra.

And, given Placer County’s approvals of massive development in November 2016, it’s our effort that stands between KSL Capital Partners and the destruction of our most fundamental Sierra values.

Pictured: Squaw Valley and its Snowpack

Sierra Watch: What We Do

For more than fifteen years, Sierra Watch has pioneered an effective approach to defending our favorite Sierra places.  We play a unique role in the Sierra Nevada conservation community, shaping and focusing the enthusiasm of widespread constituencies into effective conservation campaigns.

Our in-house expertise includes campaign strategy, media relations, and local organizing.  We leverage these skills with direct access to the best experts in the fields of law, wildlife biology, and land-use planning.  Our strategic approach positions Sierra Watch to convert development threats into conservation victories.

We’ve proven our effectiveness with remarkable conservation victories in Tahoe’s Martis Valley, on Donner Summit, and beyond.  Now we have established leadership in the next big development issue in our Sierra Nevada: the future of Squaw Valley.

The billion-dollar, thirty-year development plan for Squaw Valley would include:

■ 1,493 new bedrooms spread among a series of highrise condo hotels, many of which would be nearly 100 feet tall; 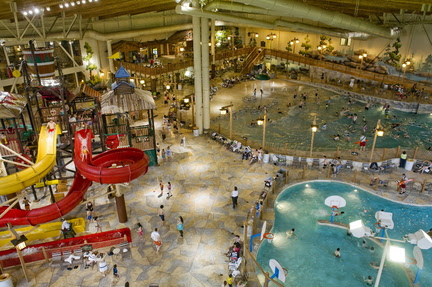 ■ 21 timeshare mansions on undeveloped land in the mouth of Shirley Canyon.

What would all that development mean to Squaw Valley, Lake Tahoe, and the Sierra?

■ Traffic: The project would add more than 3,000 new daily car trips to the Tahoe Truckee Region.

■ Tahoe: Many of those cars – 1,353/day – would head into the Tahoe Basin, crowding North Tahoe roads and contributing directly to the loss of the lake’s famous clarity.

■ Fire Safety: Planning documents acknowledge the disastrous impossibility of trying to leave Squaw Valley in the event of wildfire, estimating it would take 7 hours to evacuate.

■ Workforce Housing: The project would provide employee housing for only a small percentage of its employees – many warehoused in four-to-a-room, dormitory-style housing – exacerbating the region’s existing housing crisis.

■ Mountain Character: The proposed development is a clear threat to mountain views, dark night skies, and the valley’s essentially alpine character, posing a dangerous Disney-style precedent for the Sierra Nevada.

■ Olympic Heritage: The project would demolish two out of three of the remaining buildings from the 1960 Winter Olympics in Squaw Valley.

If there’s one thing our work has proven, it’s that irresponsible development is not inevitable.

And ever since KSL filed its initial application to develop Squaw Valley, Sierra Watch has been laying a foundation of five key strategies, on which our future success will depend: (1) Grassroots Organizing; (2) Proactive Planning and Legal Advocacy; (3) Coalition Building and Coordination; (4) Media and Communications; (5) Fundraising.

Success depends on our ability to get people to join us in standing up for our mountains in a growing movement to Keep Squaw True.  So far:

■ More than 8,000 individuals have signed the petition to Keep Squaw True.

■ More than 60 local businesses in Tahoe City, Kings Beach, and Truckee, have joined in as well – recognizing the proposed development as a threat to not only their quality of life but, also, their economic viability.

In spite of overwhelming public opposition and expert testimony, the Placer County Board of Supervisors granted KSL entitlements to develop Squaw Valley late last year.  That decision was not only irresponsible, it was illegal.  And Sierra Watch has already filed initial petitions to overturn Placer County’s approvals.

Those approvals came as no surprise, and we’ve been projecting and preparing for litigation for years – engaging experts in traffic, hydrology, and law, as well as recruiting a broad-base of community support for sustained legal action.

Throughout the administrative planning process, Sierra Watch submitted detailed comment letters, focusing on the failure of the Environmental Impact Report (“EIR”) to adequately disclose and analyze the Project’s potential significant environmental impacts or to adequately evaluate potentially feasible mitigation measures or alternatives to avoid or lessen such impacts.

Our primary legal challenge to KSL’s proposed development is based on the County’s disregard of the California Environmental Quality Act (CEQA).

We fired our first salvo in December, filing a “Petition for Writ of Mandate and Complaint for Injunctive Relief”.  It lists numerous ways in which the approval ran afoul of CEQA: Placer County failed “…to adequately analyze or mitigate the Project’s numerous significant environmental impacts, including direct, indirect, and cumulative impacts on water supply, hydrology and water quality, traffic and air quality, the Lake Tahoe Basin, fire and emergency hazards, climate change, biological resources, historic resources, night sky and scenic/visual resources, noise, and population and housing.”

This year, Sierra Watch counsel has been busy preparing the official record and honing our strongest arguments.  Later this year, they will shape those arguments into our Opening Brief – our case against the approvals.

Placer County’s approvals were not only inadequate under the demands of CEQA, they were also illegal under the Brown Act.

In January, Sierra Watch filed a second lawsuit asking the courts to overturn Placer County’s approvals based on the fact that Placer County violated state laws governing transparency and public involvement in addressing one of the most important questions raised during the public planning process for the project: How would KSL’s project impact Tahoe and the lake’s famous clarity?

Our brief cites two specific violations of the Brown Act in the suit.

First, County staff, in violation of the law, gave documents to the Board of Supervisors less than 72 hours before the public meeting that weren’t simultaneously made available to the public.

Second, the County failed to give notice in the agenda that the Board of Supervisors would be considering a substantially different version of the proposed project’s development agreement.

In order to follow through with our legal challenges to the development approvals, Sierra Watch is marshaling significant resources to engage the best available expertise. The future of Squaw Valley and the Tahoe Sierra, in our opinion, is worth every penny. 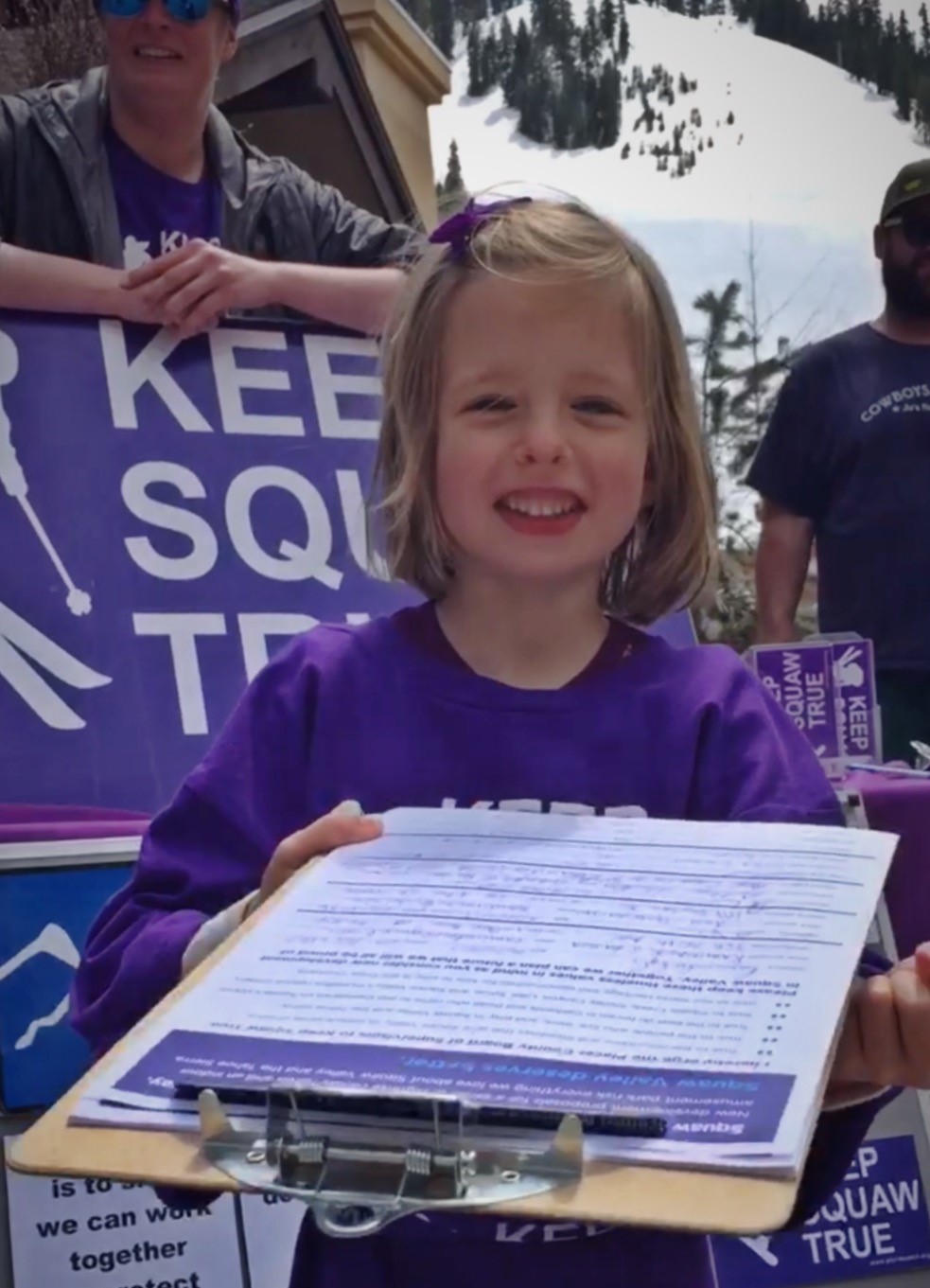 Signing up volunteers on Earth Day

KSL’s proposal is the biggest development issue facing the Sierra Nevada.  Development plans were clearly drawn up with little respect for the local community, for regional infrastructure, for the unique sense of place in Squaw Valley, or for the timeless values of the Tahoe Sierra.

For more than five years, Sierra Watch has made targeted investments in a long-term campaign.  Now we are positioned to follow through with discipline and strategy in order to pursue a better outcome, not just for Squaw but for the surrounding region – and the Sierra itself.

Our goal is to secure a future for Squaw Valley that is, as spelled out in our Keep Squaw True pledge:

■ True to the people who live, work, and play in Squaw Valley and the Tahoe Sierra.

■ True to the best ski terrain in California and those who come to test themselves on Squaw’s slopes.

■ True to our Sierra Heritage and opportunities for kids to play in the Great Outdoors.