People watch elected officials approve irresponsible development in Tahoe and ask me, “Why?!?”

They sit through hours of public testimony, for example, at a Placer County Board of Supervisors hearing, listening to impassioned pleas and reasoned arguments to deny KSL Capital Partners’ proposed development in Squaw Valley.

Then they watch the Board — or at least four out of five of them —vote to approve the entitlements.

The answer is always complicated — it has to do with power, politics, money, culture, and HEY LOOK BALLOONS!!! 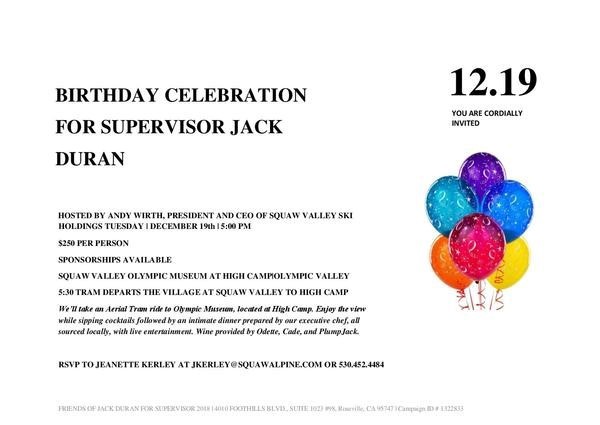 Nothing says happy, happy party time like balloons. And these balloons also help answer that question, “Why?!?”

Because these balloons are from KSL Capital Partners, the would-be developer of Squaw Valley. And they are for Supervisor Jack Duran, one of the four members of the Board of Supervisors who voted for KSL’s development, for Jack’s birthday party and campaign fundraiser TODAY(!) at Squaw Valley.

It’s not the first time KSL and its Top Dog in Squaw threw a fundraising party for Supervisor Duran. Maybe you got the invitation to their July shindig: 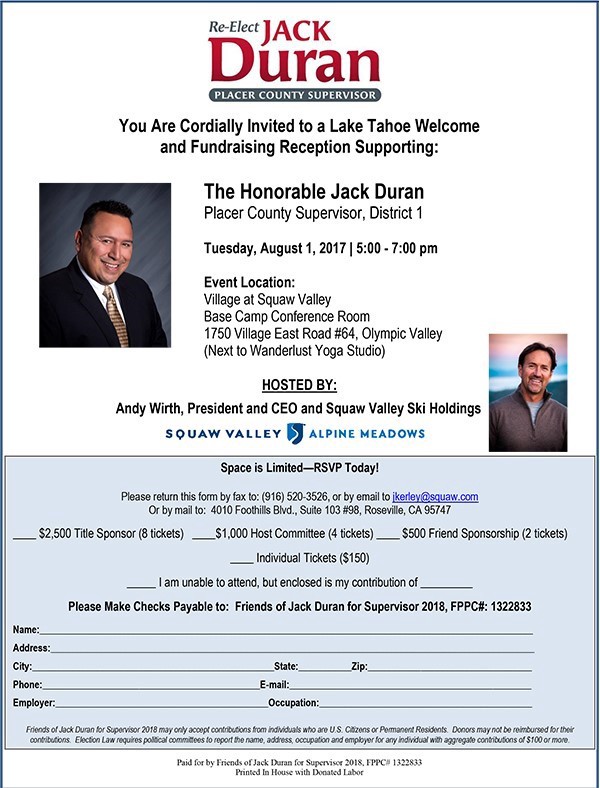 No balloons that time. Disappointing. : (

You see, here at Sierra Watch, we love balloons too. But, as a charitable non-profit, we couldn’t give them to elected officials — or raise money for them— even if we wanted to.

So, instead of throwing money around and handing out balloons, we’ll just keep working with the facts and the law, two things that argue forcefully against KSL’s proposals. And we’ll continue to get people involved in our long-term grassroots effort to stand up for Tahoe and Keep Squaw True.

Maybe you love balloons more than mountains. And, if that’s the case, you might want to drop a couple thousand bucks to sponsor one of Jack and Andy’s parties.

For the rest of us, there’s keepsquawtrue.org.

We’re thankful for you.