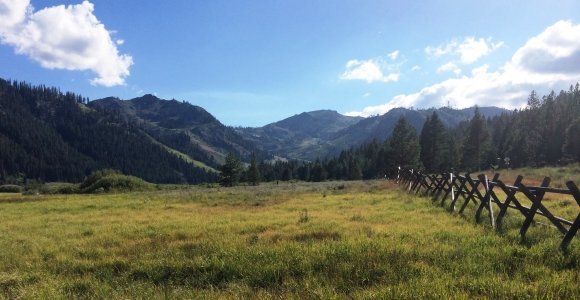 The term “Squaw” has an undeniably dark history – one of pain, misogyny, and racism.  A tainted transplant from the Algonquian language of Eastern North America, the term was artificially affixed to this western alpine valley and the people who lived here.  It did not come from the language of the Washoe, the native tribe of Squaw/Olympic Valley.  The name was applied when westward-bound travelers arrived and saw only women and children in the meadow as most of the men were away hunting.  The newcomers didn’t ask what the valley was called already; they decreed a word from their own experience.

Since then, the story of the Washoe people is one of tragedy and resilience in the face of conquest and oppression.  (To learn more about that history and the current lives of the Washoe, we recommend: “Washoe Tribal History,” a booklet by the Washoe Cultural Resources Office of the Washoe Native Tribe of Nevada and California, for the US Forest Service and Washoe Tribe of California & Nevada’s official website).

More than 150 years since the valley was labeled “Squaw”, there is now a growing, shared effort to step back and consider the meaning – the multiple meanings – of the name of one of our favorite places.

It’s an issue Sierra Watch has considered internally, and discussed with the local Washoe tribe, over the last nine years of our work to Keep Squaw True.  The conclusion we’ve reached so far is that we cannot do justice to our mission, to protect the timeless natural resources of the valley and the Tahoe Sierra, without using its widely understood place name.

History, however, is fluid; and times change.

We understand that, these days, if you refer to the place as Squaw Valley, you are almost certainly not trying to offend or diminish anyone.  But it doesn’t take much historical perspective – or just human empathy – to realize that just because something is not offensive to you doesn’t mean it’s not offensive to someone else.  And that perspective deserves particular respect when it’s held by ancestors or, in this case, by the people who called the place home long before current residents arrived.

Again: our mission and our commitment is to defend the place from reckless development, to ensure that the values that pre-date the first prospectors – and will outlast us all – are not lost to short-term greed.

So, for now, we will continue to refer to the place as Squaw Valley, as we further our commitment to Keep Squaw True.

But we look forward to the day when: not only have we defeated the misguided attempt to destroy the values of the valley with endless highrises and an indoor waterpark but, also, when everyone can talk about the place with the respect and admiration it deserves.

A respect for all who have come before us in a place that has been protected – kept true – for all those yet to come.

Great Time to Give to the Great Outdoors – Summer Match Announced!
Scroll to top