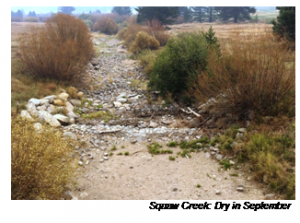 Olympic Valley, Calif. February 26, 2015 – The Board of Directors of Squaw Valley’s primary water provider yesterday reaffirmed its intent to solve its local problems with water imports from Martis Valley.

In a 4-1 vote, the Squaw Valley Public Services District (SVPSD) directed staff to “…define a preferred water supply alternative from Martis Valley” as a “redundant water supply” and to identify sites for wells and a pumping station in Martis Valley, a pipeline corridor, and terminal storage tanks in Squaw Valley.

The SVPSD seeks water imports in order to serve new and existing customers in an emergency caused by drought or local contamination. But the district also acknowledged that if the pipeline were built, the new water resource would also be available to support new development.

“We share the district’s concern about water security,” said Isaac Silverman of conservation non-profit Sierra Watch. “But what we learned today is that water exports from Martis Valley could be used to support new development in Squaw Valley.”

Yesterday’s discussion over Squaw Valley’s future took place amidst the harsh reality of record-breaking drought and, also, the possibility of massive new development on the valley floor.

In Squaw Valley, painful reminders of prolonged drought are all around. With only about 25% of the annual snowpack, south facing slopes are bare. Earlier this month, the ski resort had to cancel World Cup events scheduled for March.

Although the current drought has been severe, according to SVPSD General Manager Mike Geary, “It’s not the worst case scenario for water in Squaw Valley.”

What really concerns him is “…extended drought with timing of storms that won’t be as fortuitous as the last few years.” Regarding the current drought he said, “We’ve been pretty lucky.”

Meanwhile, future demand threatens to put even more pressure on insecure supplies; Denver-based KSL Capital Partners seeks entitlements to build out a series of ten-story tall highrise condo/hotels, with 1,500 new bedrooms and an indoor water park they say will “compete with Lake Tahoe” for tourist dollars.

Last summer, the water district released a state-mandated ‘Water Supply Assessment’ for KSL’s proposed development. That study concluded that there would be enough water in the local watershed to provide new customers with ample water.

But that assessment did not include any data from the existing drought, now in its record-breaking fourth year. So, at yesterday’s meeting, the district decided to redo its studies, including up-to-date data from the ongoing drought.

Geary stated that, although he believed the current assessment met minimum legal requirements, project proponents agreed to redo the assessment over concerns that the initial Water Supply Assessment would be “…more challengeable if it did not include the severe drought we are currently in.”

The new assessment, due out in July, is expected to incorporate streamflow and well-elevation data over the last three years as well as increased snowmaking and adjusted occupancy projections. The final version will be folded into the environmental assessment for KSL’s development proposal, a draft of which is due out in April.

Meanwhile, SVPSD will look for well sites in Martis Valley and a corridor for an underground pipe along the Truckee River.

Martis Valley interests, however, are unenthusiastic about exporting its resources to supply new development in Squaw. SVPSD board member Carl Gustafson, voiced his disapproval as well, saying that that taking water from one watershed and moving to another is simply “bad policy.”

Tahoe area conservationists promise to monitor every step of each planning process, engaging experts and coordinating public participation along the way.

“For anywhere in region, if the problem is too much development and not enough water, the solution is not to import water from somewhere else in Tahoe,” said Silverman. “The last thing Tahoe needs is a pipeline to supply new highrises.”