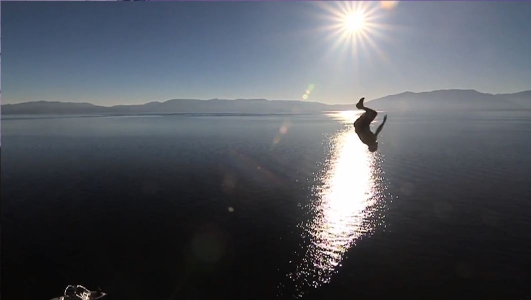 The lifts have stopped spinning and it’s a lovely 74 degrees in Tahoe City.

As we swing into summer in the Sierra, here’s a quick update and timely alert: 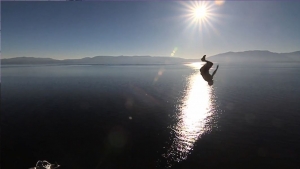 On May 24, our mountains had a day in court. In a day-long hearing, Sierra Watch spelled out how Placer County’s 2016 approvals were illegal under state planning laws. 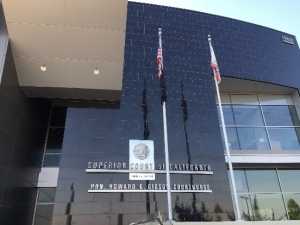 The Sierra Sun was there to cover the hearing:

We’ve pasted their full coverage below.

Alas this is not an episode of Law and Order; it does not get resolved in one hour. Our arguments are built on years of long-term effort. And a decision isn’t due for another 90 days. In the meantime, we’ll be out talking to folks who love Tahoe and getting them involved in our ongoing effort to Keep Squaw True.

The United States Forest Service is accepting written comments on KSL and Alterra Mountain Company’s proposal to construct an aerial gondola of 37 towers traversing 2.5 miles of the Pacific Crest of the Sierra Nevada from Squaw to Alpine.

It’s important to remember that, although the Forest Service is also considering alternative alignments, KSL is still applying for permission to run the gondola through land designated by Congress for national wilderness protection. 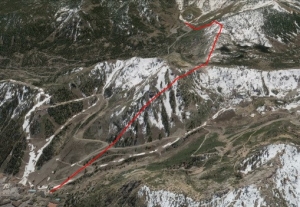 And the integrity of Granite Chief Wilderness – as seen on the right side of the picture above –  is not the only issue at stake.

Even the project’s most “environmentally superior” route would have 33 adverse environmental impacts on important Tahoe values; including increased traffic, loss of wildlife habitat, and destruction of that unique Sierra experience the Forest Service calls “solitude or primitive unconfined recreation.”

Sierra Watch is engaging experts in planning, wildlife, and traffic to better understand the proposal and what it would mean to Squaw Valley, Alpine Meadows, and our Tahoe Sierra. We’ll be submitting thorough and robust comments to the Forest Service. 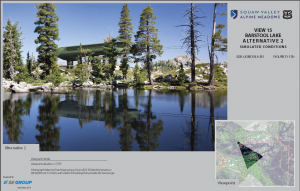 If you care about this issue, you should send them a letter, too. Comments are due June 11, 2018.  You can learn more about the project here:

You can mail or email comments to:

There’s no better time to get involved.  One thing Sierra Watch has learned: the more that people get involved, the better the chance that important decisions reflect our shared values. 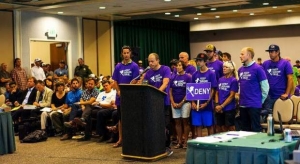 Pictured: (Sierra Sun File Photo) Opponents, wearing purple “Keep Squaw True” T-shirts, of Squaw Valley’s village redevelopment plan made their case before the Placer County Board of Supervisors, which approved the project by a 4-1 vote in November 2016. The prohect is the subject of two lawsuits filed by Sierra Watch

And the nonprofit organization, which has led an opposition campaign “Keep Squaw True,” recently took that case to court. That lawsuit is one of two filed by Sierra Watch over Placer County’s approval, with another alleging supervisors violated California’s Brown Act.

Both cases were argued in courtrooms in May, while another planned project — a gondola linking Squaw Valley and Alpine Meadows — was also the topic of a public hearing in the past week.

“Just because the project is not located in the Basin, doesn’t mean impacts on the Basin shouldn’t be considered,” Daniel Selmi, a Sierra Watch attorney, said in a May 24 hearing in Placer County Superior Court. “The County’s obligation is to examine the impacts. The village will generate some traffic and some of that traffic will venture into the Basin … an environmentally stressed area. It’s obvious. There’s not some sort of wall between the two. Lake Tahoe is the draw up there.”

Selmi and fellow Sierra Watch attorneys outlined what they deemed as deficits in the meeting requirements under the California Environmental Quality Act, arguing Placer County approved the project despite failing to consider the full impact on the region and its residents through a thorough analysis.

Whit Manley, representing Squaw Valley, said the project’s environmental impact report met all requirements, and that Squaw Valley went beyond its obligation under law to mitigate the impacts identified. But it’s no surprise Sierra Watch isn’t satisfied by the report, saying the organization doesn’t seem to recognize efforts to mitigate issues outlined, which has included scaling back the scope of the project from 1,877 residential units to 1,295 in 2011, and then again to the 850 units eventually approved.

“I recognize the petitioner thinks that’s still too many,” Manley told Judge Michael Jones. “I don’t know what’s acceptable to them. But what matters, ultimately, is what is acceptable to the Board of Supervisors.”

He said the court should not be asked to weigh which side has “better evidence,” but whether the supervisors’ conclusion — approval — was within the boundary of the law, as opposed to “second-guessing people elected to make these decisions.”

The project’s environmental impact report raised more questions than it answered, said Amy Bricker, a Sierra Watch attorney who addressed impacts on fire safety with added traffic to evacuation routes, already estimated to take several hours to move everyone out of the area. She said while a “shelter in place” approach discussed in the report might provide safety to some, it doesn’t fully consider the project’s impact on a site designated a very high Fire Hazard Severity Zone.

In his opposition brief to Sierra Watch’s suit, Manley wrote “the Board found that the Project would not interfere with adopted emergency evacuation plans, and that people or structures would not be exposed to a significant risk of loss from wildland fires.”

“The question is how bad is it going to be?” Bricker said in court. “The best-case scenario is sitting in your car for five hours … just to get over to (State Road) 89.”

“(Even with shelter in place) there’s no analysis of how bad the situation is going to be, how long would they be there? … These are all unanswered by the analysis. It jumps to the conclusion that (the project) does not create a safety risk. How did it reach that conclusion?”

Each side now awaits word on the judge’s ruling, which could take up to 90 days from the May 25 hearing on the matter (See this story at SierraSun.com for copies of all court filings in the cases).

A separate suit filed by Sierra Watch alleging Placer County’s supervisors violated California’s Brown Act by not properly notifying the public in entering what it describes as an “11th-hour agreement” by the Squaw Valley to pay a Tahoe Regional Planning Association Air Quality Mitigation Fee.

Sierra Watch said a memo on the agreement was not available to the public within 72 hours of a Nov. 15, 2016 meeting where the project was approved by supervisors. The memo wasn’t emailed to the Board of Supervisors until 5:36 p.m. Nov. 14. A copy of the memo was placed at the Clerk of the Board of Supervisors Office in Auburn, meaning the document was not available to the public prior to the meeting during the next day’s normal business hours.

A “Proposed Statement of Decision” was released by the court on May 9, with Jones determining “the County did not violate (the Brown Act) in considering approval of the Development Agreement.”

And, Jones continued, “(Sierra Watch) suggests several alternative ways in which the County might have alerted members of the public to the existence of the (memo) following its distribution to the Board,” Jones wrote. “But nothing mandates the use of alternative methods … Petitioner fails to establish a violation of the statute.”

Isaac Silverman, a Sierra Watch attorney, said the organization won’t comment on the matter until a final ruling is made.

Clayton Cook, deputy county counsel, said Placer County has been clear it did not violate the law in reaching the agreement.

“Everything has been done within the Brown Act and the letter of the law,” Cook said. “It appears the court ultimately sided with us.”

Report by Brian Hamilton, Editor of the Sierra Sun and The Union