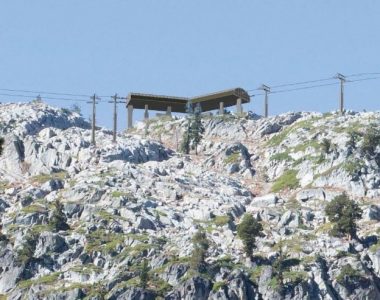 The joint Draft Environmental Impact Statement/Report (DEIS/R) analyzes the proposal by Squaw Valley Ski Holdings, a subsidiary of KSL and their newly formed Alterra Mountain Company to build an aerial gondola consisting of 37 towers traversing 2.5 miles of the Pacific Crest of the Sierra Nevada just north and west of the Lake Tahoe Basin.

The document assesses three different routes and predicts that even the project’s most “environmentally preferable” route would cause 33 adverse environmental impacts on important Sierra issues, ranging from increased traffic to lost opportunities for what the Forest Service calls “solitude or primitive unconfined recreation.”

The environmental document compares the impacts of the KSL Capital Partners/Alterra Mountain Company proposal, Alternative 2 in their documentation, to two alternative gondola routes, Alternatives 3 and 4, or no gondola construction at all.

KSL’s proposed route would cut through the Granite Chief Wilderness Designation as well as across the popular Five Lakes Trail.

Unsurprisingly, the studies identified “no action” as the “environmentally preferable” course for the Forest Service and Placer County, and it also found that KSL and Alterra’s original proposal to run the gondola through land designated for National Wilderness was the most environmentally destructive.

Instead the Forest Service and Placer County identified one of the alternate gondola routes, Alternative 4, as the “environmentally preferable” action alternative. However, even following the “environmentally preferable” route of Alternative 4, the Forest Service found that a Squaw Alpine Gondola would cause 33 adverse environmental impacts across 9 categories including: regional transportation, noise, air quality, vegetation, botany, wildlife and acquatics, wetlands, and hydrology and water quality.

It would also cause an additional eight minor adverse environmental impacts including ones in two new categories: increased climate change and greenhouse gas emissions and lost “opportunities for solitude or primitive unconfined recreation.”

Sierra conservationists were diving into the document to better understand what the project would mean to Tahoe’s natural environment, and whether any of the routes.

“Our job now is to study this assessment to better answer the fundamental question: does the gondola make sense for North Tahoe or is it just another example of KSL and Alterra’s attempt to turn Squaw Valley into a Vegas-style amusement park?” says Tom Mooers, Executive Director of Sierra Watch.

Its northern terminus in Squaw Valley is part of KSL and Alterra’s controversial plans to transform the North Tahoe mountain with highrise condos, an indoor water park, and a roller coaster – as well as the proposed gondola.

In November 2016, Placer County officials approved that application for development entitlements at the base of Squaw, but those approvals have been met with overwhelming resistance from the movement to “Keep Squaw True” – made up of local residents and California conservationists – and held up by two lawsuits in Placer County Superior Court.

The proposed gondola is still in the early stages of the public planning process.

The Draft Environmental Impact Statement is designed to inform the public and decision-makers about the project’s effect on the area and to seek ways to limit or prevent negative impacts. Regulatory agencies, conservation organizations, neighboring jurisdictions, and members of the public now have the opportunity to submit comments on the project to the Forest Service.

Of particular interest are the impacts that Forest Service identifies “adverse” or Placer County identifies as “significant and unavoidable.” And of the utmost concern is the scenic value and natural resources of the project location.

Due to the amount and scale of the infrastructure any proposed route would have adverse or significant and unavoidable impacts to what the agencies refer to as the area’s “visual character.” Although the study found that the alternative would reduce the severity of this degradation, infrastructure would still impact viewsheds throughout the region, including from within the Lake Tahoe Basin and the nearby Granite Chief Wilderness.

That proximity to the Granite Chief Wilderness is also the reason that the Forest Service found minor adverse impacts to “opportunities for solitude or primitive unconfined recreation.”

“There’s a unique sense of place at the crest of the Sierra, and industrial-scale infrastructure looming over the Granite Chief Wilderness presents a clear threat to the integrity of the Five Lakes Trail and to the wilderness experience,” according to Mooers.

Wildlife habitat will prove to be another challenging issue; the project runs through land identified by the United States Fish and Wildlife Service as critical habitat for the preservation and recovery of the endangered Sierra Nevada Yellow-legged Frog. Even the environmentally preferable route would disturb and destroy wetland and riparian habitat usable by the endangered frog, resulting in multiple adverse impact findings.

And although proponents tout the project as a traffic solution, the Forest Service and Placer County found that construction of the Squaw Alpine Gondola would actually attract more than 700 new visitors and put around 430 more cars on the road during busy weekend days.

And, according the review, when the project is considered cumulatively alongside KSL’s controversial waterpark and village Squaw expansion plans, the picture is particularly grim: travelers should expect slow speeds and long waits extending from Interstate 80 to Squaw Valley.

Finally, conservationists also flag the role of the project in providing new “growth-inducing” infrastructure, which could encourage new development in a treasured alpine landscape. That’s because a Squaw Alpine Gondola would not only connect to the existing Alpine Meadows development and proposed development in Squaw Valley, it would also connect with a new development proposed for the White Wolf property in between the two resorts.

Although details remain scarce, would-be developer Troy Caldwell has submitted initial plans to build 38 luxury homes, a ski lift, a lodge, tennis courts, equestrian facilities – and a connection to the new gondola as a central amenity.

Conservation groups had hoped to create a collaborative agreement that might allow for a new gondola, as long as it was tied to protection of some of the iconic White Wolf landscape. But proponents were unwilling to consider a broader approach.

The Forest Service and Placer County will be accepting comments on their Draft documents through June 11, 2018. The massive document for the Squaw Alpine Gondola is available at:

For more information on the Squaw Alpine Gondola and the comment period/process, please go the USFS website to learn more: https://www.squawalpinegondola-eis.com/

Sierra Watch works to protect great places in the Sierra Nevada. Founded in 2001, the Nevada City based non-profit has built a remarkable track record in land preservation in Tahoe’s Martis Valley, on Donner Summit, and for other treasured Sierra landscapes.  For more information, visit www.sierrawatch.org.

All Rise to Keep Squaw True / Court Date Moved to May