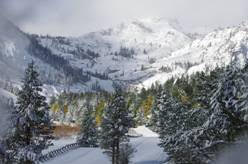 KSL’s “Village at Squaw Valley Specific Plan ,” as proposed by its subsidiary Squaw Valley Real Estate, would remake North Tahoe with development of a size, scale, and scope the region has never seen.

The $1 billion, 25-year project would include: 1,493 new bedrooms spread among a series of highrise condo hotels ; a 90,000 square foot indoor waterpark with waterslides, indoor waterskiing, wave riders, fake rivers, bowling, arcades, and more; and 21 timeshare mansions on undeveloped land in the mouth of Shirley Canyon, a popular hiking spot.

“The proposed development would mean that our time in the mountains is spent in traffic or in a highrise or rafting down a fake, indoor river,” said Mooers.  “That’s not what Tahoe is about.”

More than 6,000 individuals have joined the movement to deny the development and, instead, Keep Squaw True .  Hundreds showed up to Placer County’s hearing on the project last month.  Many took to the podium to urge the County to reject KSL’s proposal and, instead, pursue a more reasonable development plan for Squaw Valley. 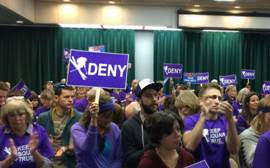 But the County Board of Supervisors sided with KSL and voted 4-1 to approve the project.  According to Sierra Watch, that vote was illegal under state planning law.

“State law requires that Placer County understand and, wherever feasible, avoid the negative impacts this project would have on Squaw Valley and North Lake Tahoe,” said Isaac Silverman, Staff Attorney for Sierra Watch.  “But Placer County’s process failed on both counts – instead downplaying the long-term and irreversible harm KSL’s project would cause and ignoring alternatives that would reduce it.”

Sierra Watch’s initial brief, technically a “Petition for Writ of Mandate and Complaint for Injunctive Relief”, lists numerous ways in which Placer County’s approval ran afoul of the California Environmental Quality Act, better known as CEQA.  Those arguments will be explained in more detailed briefs in the months – and, likely, years – ahead as the case makes its way through Placer County Superior Court.

For example, the County’s environmental review “relied on faulty methodology and severely underestimated the Project’s overall traffic generation,” according to the letter.

“They just get a lot of things flat wrong – like traffic. The County somehow projected that KSL’s indoor waterpark, which would be as wide as a Walmart and more than twice as tall, would generate only 58 car trips per day,” said Silverman.  “That math can’t pass the sniff test, nor withstand judicial review.”

In its initial brief, Sierra Watch is asking the Court to overturn the County’s approvals, for permanent injunctions restraining both KSL and the County “from taking any action to implement the project”, and for costs and fees as authorized by law.

“Our case is rock solid and our effort is rooted in a shared commitment to the timeless values of the Tahoe Sierra,” said Mooers of Sierra Watch.  “Our goal is not simply to prevail in court but, more importantly, to bring people to the table to come up with a blueprint for Squaw that we can all be proud of.”

For a direct link to the writ, click here or download it here: Verified Petition for Writ of Mandate and Complaint for Injunctive Relief

Final Hearing on Squaw Proposal, Nov. 15th!Tahoe Traffic and Squaw Valley–When you are in a hole, the first thing...
Scroll to top