On July 2nd Squaw Valley sent out an email announcing that you intend to submit a formal proposal for a gondola connecting Squaw Valley and Alpine Meadows.

According to the map and materials released on April 13, 2015, the proposed route would cut through land designated as wilderness by the California Wilderness Act of 1984.

We are writing to request that, if you do follow through with an actual project proposal, you choose a route that avoids federally designated wilderness.

The Wilderness Act of 1964 is one of the greatest achievements in the proud history of American conservation.  It’s a bold statement of principle that we, as a country, value wilderness and are committed to protect the wilderness experience, for ourselves and generations to follow.

In the words of the Act itself, passed by Congress after years of advocacy and effort, “A wilderness, in contrast with those areas where man and his own works dominate the landscape, is hereby recognized as an area where the earth and its community of life are untrammeled by man, where man himself is a visitor who does not remain.”

When it was signed into law by President Lyndon Johnson the Wilderness Act secured immediate protection of more than 9,000,000 acres of federally designated Wilderness.  It also created provisions to add, by acts of Congress, more land to the federal wilderness system.

After more than a decade of careful inventory, as well as five years of Congressional politicking, President Ronald Reagan signed the California Wilderness Act of 1984 into law.  It added 3,000,000 acres to the National Wilderness Preservation System, including the newly created Granite Chief National Wilderness Area.

At that time, significant portions of these lands, including more than a third of Granite Chief were privately owned.  To encourage their permanent protection, Congress simultaneously authorized the Secretary of Agriculture to purchase any private lands within the newly created Wilderness Area boundaries from willing sellers.  The bulk of the privately owned land in the Granite Chief Wilderness was acquired by the Forest Service in 1991, but a small portion of the area, including the land proposed for the gondola, remains in private hands.

We understand that these cliffs, ridges, and forests on which the gondola would be built are privately owned.  However, the inclusion of this land within the Granite Chief Wilderness Area boundary in 1984 is a clear statement of its value to our nation; that we recognize that this land is special − and should remain that way.

Wilderness designations do not come easy.  Each marks its own remarkable achievement, the result of years of field research, citizen advocacy, and, often, political compromise.

The original Wilderness Act of 1964 demanded scores of re-writes and nine years of Congressional history.  Its principal author, Howard Zahniser, was motivated by his conviction that America has “…a profound fundamental need for areas of the earth where we stand without our mechanisms that make us immediate masters over our environment.”

We ask you to join us in honoring that commitment, made as a nation more than fifty years ago and reaffirmed by the California Wilderness Act of 1984:  No proposed gondola should threaten the existing boundaries − and timeless values − of the National Granite Chief Wilderness Area. 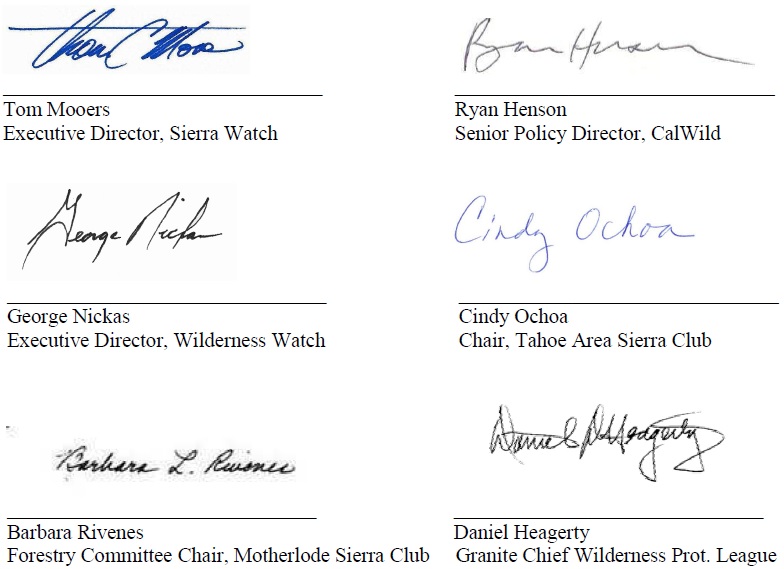